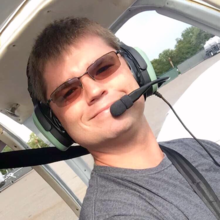 Chris began his involvement with aviation during high school, obtaining a commercial pilot certificate at the age of 18. In college he studied Aeronautical Science at Embry-Riddle Aeronautical University, while also working as a flight instructor. After college he worked for a large regional airline, flying large turbo-props in the Caribbean and jet aircraft from Chicago, New York and Miami. After more than 4 years as an active airline pilot, he enrolled in a master’s program focusing on aviation management. While completing the MBA program he returned to flight instructing, at Embry-Riddle University. His flying experience includes 5,500 hours in airplanes and over 1,300 hours as an instructor, teaching in a wide range of general aviation aircraft. He now owns and operates Three Point Aviation Services LLC, in Daytona Beach, FL.Carl is an international Airline Pilot with over 12,000 hours flying in more than 50 types of aircraft. He has logged over 10,000 hours flying in the National Airspace System(NAS) under Instrument Flight Rules (IFR). Carl is a volunteer Aviation Safety Representative appointed by the FAA and has conducted over 100 safety seminars in the past 15 years. Carl is author of The Aerospace Scholarships Guide and numerous aviation blog posts. Carl loves to talk aviation and is host of Aviation Careers Podcast, the Stuck Mic AvCast, and Sun N Fun Radio. When he is not flying, writing about flying, or talking about flying Carl spends most of his time exploring museums and light houses.
Buy $29.95